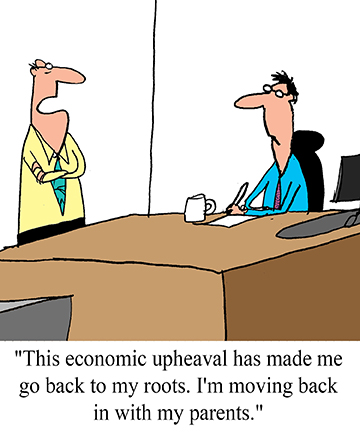 The stock market’s recovery from its March plunge has seen a few groups and stocks rise to the top. Many of those favored groups and stocks are heavyweight members of the Nasdaq 100 stock index, trading under the symbol QQQ. This has lifted the QQQ above its medium-term 50-day moving average, and brought the index near a flat performance year-to-date, a very surprising development given the dire economic consequences of the coronavirus shutdown. The chart below displays this seemingly bullish move by the QQQ, with the triangle highlighting the leap above the 50-day moving average.

Further adding to the bullish tone, the QQQ has also found support at its 20-month moving average, a reference line that has held throughout the entirety of the post-financial crisis rally.

Driving the QQQ’s strength is a series of breakout performances from heavyweight companies whose fortunes are viewed to be minimally, or even positively, affected by the coronavirus shutdown. Here are a couple of those breakout stars:

And in strong recoveries from the two companies that account for over 20% of the QQQ, Microsoft and Apple, and you have a powerful rebound.

At this point, for the QQQ at least, the economic damage from the coronavirus shutdown appears to be very limited and temporary. The rest of the stock market is mostly telling a different story. The chart below shows the huge difference in the year-to-date performance of the QQQ and small-cap stocks. Small-cap stocks are viewed as being far more sensitive to the domestic economy.

Stocks, broadly speaking, have recovered about half of their monster decline. Oil prices are hitting lows not seen in almost 20 years. Banks just reported earnings drops around -50%. The future is incredibly foggy and uncertain. As a result, most market watchers expect the broad stock market to follow a typical bear market pattern where a rebound recovery eventually leads to further selling. That selling may or may not push the market to the levels seen in March, when markets were unglued prior to massive amounts of Fed action. It would be expected that the Nasdaq – unfettered with the lagging energy, finance, and industrial sectors – will continue to outperform. Nevertheless, the recovery and strength in the QQQ and some of its major component companies has been a very surprising development for investors.

After one of the market’s best weeks in decades, stocks opened Monday’s session giving back -1%. An oil production cut deal between OPEC and Russia failed to assuage investor concerns. Tuesday brought a broad-based +3% rally in stocks with investors cheered by a possible reopening of parts of the economy, and a surprisingly solid earnings report from Johnson & Johnson (JNJ). Dismal earnings from banks were largely ignored in Tuesday’s trade; however Wednesday’s bank results appeared to catch investor attention. The steep declines coupled with a sharp move lower in interest rates to lead to a sizable drop in bank shares. Oil prices fell below $20 for the first time in almost 20 years to add to a negative day for traders. Stocks slipped -2%. But stocks bounced back Thursday with a +0.6% gain as markets digested another horrendous weekly job loss report. Unemployment claims crossed 20 million. However, investors may have largely factored in the near-term depression-type economic hits. This week and last, they appear to be focused on the strength of a rebound the economy might get toward year-end. Nasdaq stocks continued to outperform the rest of the market, adding almost +2% Thursday while the rest of the market was mixed. Stocks accelerated Friday with a +2.7% gain as drug maker Gilead (GILD) reported some success in early drug trials to fight coronavirus. Airplane maker Boeing (BA) announced they would restart plane production after a three-week hiatus. All of these announcements served to confirm the market’s enthusiasm around a restart of the economy. Meanwhile, other market watchers urged caution, saying the market had gotten way ahead of itself in rallying so strongly while much of the economy will remain shut down for weeks more.