A stock market rally is rarely about any single thing. While one event, news item, or good market day can certainly change the tone of the market, it takes a full menu of inputs turning positive to sustain and build a lasting rally. Such as been the case over the past three months. This overview of the past three months provides a good general display of how a stock market rally gets going and stays going. Whether this rally marks more time and higher prices for beyond three months is anybody’s guess.

Stocks ripped higher after the 2016 Presidential election, giving a great big exhale of relief once the uncertainty and tension of that event had passed. Immediately embracing the pro-business, pro-growth stance of the incoming Trump administration, money poured into the smallest companies in the market as investors figured these companies would benefit most from the new government’s policies, increasing protection for domestic companies at the expense of larger global companies. Smaller companies are viewed as being the most sensitive to changes in the economy. When they lift off, it is often a good sign for stocks in general.

But there were other factors at work behind this rally. For one, energy companies looked poised to return to making money now that oil prices had recovered from an 18-month plunge. Positive earnings in the oil patch lagged the upturn in price by almost a year. But as oil prices climbed and held above $40, and then $50, it became clear that the wave of bankruptcies and losses in the energy patch would be coming to an end. Note that the bottom in stocks last February coincided with the bottom in oil price. 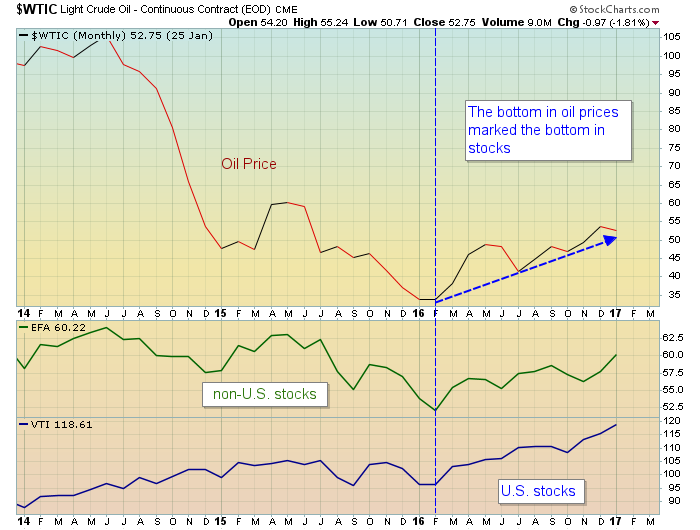 This correlation between the stock market and oil prices was seen even more acutely in global stocks (the middle chart above). Oil prices are viewed as a proxy for global economic growth as more growth demands more oil/energy. Thus, as oil and commodity prices go, so goes many international markets often.

Another factor in the rally: the pro-growth tilt of the new administration sent interest rates sharply higher. Two years ago this would have been bad news for stocks. But not these days! Stocks have been long-prepared by the Federal Reserve that higher rates were coming. Stocks have adjusted to that coming reality. When interest rates shot higher on expectations for faster economic growth, markets were ready with financial stocks the main beneficiaries. The Trump Administration’s lighter touch on bank regulations added more fuel to the jump in financial stocks.

So we have rising oil prices bringing energy stocks back from the dead and we have financial stocks finally getting a long-awaited lift from a jump in interest rates. These are two areas of the market that had been dead for two years. They were ready and waiting for some trigger to get them moving. Financial stocks account for almost 20% of the global stock market. These stocks get going for the first time in two years and good things will happen.

Making the rally stronger has been the fact that the tech/consumer stocks, left out of the initial rally, caught up! As new money comes into the market, it seeps into previously “undiscovered” or neglected portions of the market.

Chart 4 – The rally expands to include Tech/consumer stocks

The strength begets more strength. Investors hear on the news about stocks rising day after day, hitting new highs, et al. They want to join the party. That brings another round of new money into the market fueling the rally anew. Pauses in the market are just that – pauses for investors to catch their breath and assess how far stocks have come. Rather than sell off and fall, however, every little dip in prices brings buyers who felt they missed out on the first move higher. This chart of medium sized companies shows how rallies go through leaps in price followed by pauses to refresh.

Stocks break out to new highs, again and again, until all the money that wants to come into the market has done so. With the new money already invested, stocks become poised for a drop. Investors look to lock in their gains and buyers have become more scarce. Stocks fall with investors this time NOT stepping in to buy the dip. Seeing this behavior – more sellers with few buyers – active market watchers sense the rally is over and sell their shares. Ultimately selling begets more selling, and markets drop to a point where investors once again get excited about buying. That new buying can be triggered by attractive prices or by new and positive information. And the cycle begins anew. But it takes a fairly wide swath of “new” market inputs like those described above to really kickstart a solid and sustained rally.

Our powerful TimingCube models are built to monitor all of this price and market action for you, telling you when conditions are favorable for stock prices to rise or fall. We take the guesswork out of investing. Our models are trend-following, meaning that they do not predict turns in the market, but rather follow and react to those turns. Thus, we will miss out on the initial jump in price but will quickly get on board the rally. This allows us to capture the bulk of the market’s moves. Most importantly, our models keep us out of harm’s way when stocks are plunging, as they do every few years. By avoiding the market’s damaging drops, we preserve our wealth to benefit from the next rally. A buy and hold strategy, where a portfolio does not make a dramatic adjustment during seriously falling markets is a major concern of the new crop of “robo-advisors”. These automated portfolios are built to stay invested at all times regardless of whether stocks are going up or down. We take the opposite view – there are times to BE invested and times NOT to be invested. Be smart about your hard-earned money. Recognize that markets are emotional beings – they have periods where they are happy and everyone makes money; they have periods where they are very sad and most everyone loses money. Here at TimingCube we seek out the happy markets and avoid the sad markets. Simple as that.

Stocks opened the week with a flat -0.3% performance with McDonalds (MCD) and Halliburton (HAL) both reporting earnings that failed to enthuse investors. Tuesday was a different story with growth stocks powering upward throughout the day on strong earnings from DuPont (DD). Gains were broad-based with the major indexes up +0.7%. The buying continued Wednesday with the Dow Jones Industrial Average leaping above the 20,000 mark for the first time. Stocks added another +0.8% on good earnings from disk drive maker Seagate (STX), railroad Norfolk Southern (NSC), Texas Instruments (TXN), and Boeing (BA). Weak earnings from semiconductor heavyweight Qualcomm (QCOM) and drugmaker Bristol-Myers Squibb (BMY) prevented further gains Thursday though stocks managed to hold flat overall. Flat was again the order of the day in Friday’s session with Google/Alphabet (GOOGL) falling on earnings while fellow tech titans Microsoft (MSFT) and Intel (INTC) rose. Negative reactions also came from disappointing earnings from Chevron (CVX) and Colgate-Palmolive (CL).
Stocks posted a positive week with the S&P 500 adding +0.98% and smallcap Russell 2000 gaining +1.30%. A heavy dose of tech earnings proved healthy for the Nasdaq index which rose +2.07% for the week and continuing its leadership among the indexes so far in 2017.