As we’ve noted many times before, the stock and bond markets since the financial crisis have been driven for the most part by the policies of the world’s central banks.  Central banks, such as the Federal Reserve in the United States (the “Fed”) and the European Central Bank (“ECB”), have been very sensitive to markets and have clearly sought to directly influence them.  There is no question they have been successful in this task.  Simply look back to December when U.S. markets were struggling.

Money is and has been extremely cheap during this economic cycle, with U.S. 10-year Treasury rates having only risen to 2%, a level that in times past would have been only touched during a deep recession, if even then.  However, the 2% found with U.S. Treasuries would be a veritable feast of riches for bond investors in Europe.  There, interest rates in the German Bund (as their government bonds are known) have fallen BELOW ZERO (0%) and now offer a negative -0.34% yield.  This means that investors must PAY the German government in order to own their bonds.  That seems like a pretty sweet deal for the German government, and as you’ll see below, it is. The Germans issue bonds and pay no interest; but instead get checks from investors in order to provide safe-keeping for investor funds.

See the chart below of the past ten years in German 10-year Treasury yields – down, down, and down; and now notably negative. 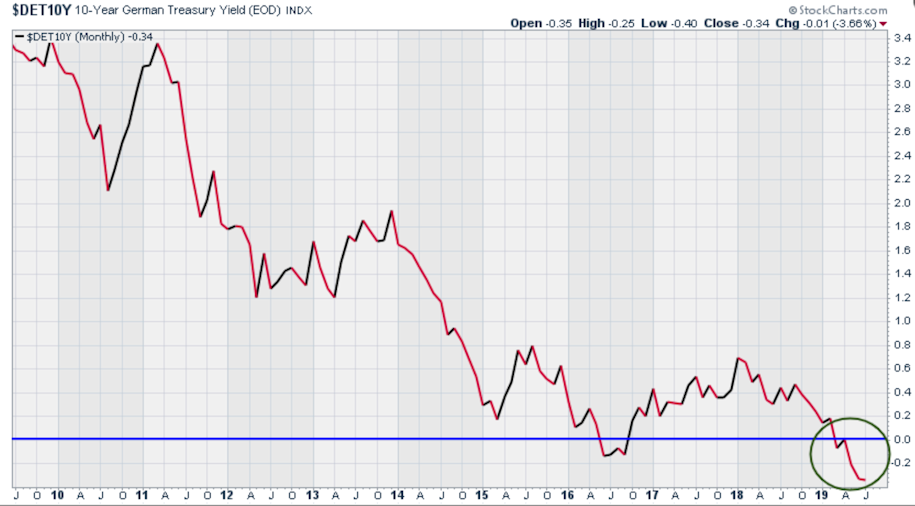 “A negative interest rate means that the central bank (and perhaps private banks) will charge negative interest. Instead of receiving money on deposits, depositors must pay regularly to keep their money with the bank. This is intended to incentivize banks to lend money more freely and businesses and individuals to invest, lend, and spend money rather than pay a fee to keep it safe.

During deflationary periods, people and businesses hoard money instead of spending and investing. The result is a collapse in demand for goods and services, which leads to prices falling even further, a slowdown or halt in real production and output, and an increase in unemployment. A loose or expansionary monetary policy is usually employed to deal with such economic stagnation. However, if deflationary forces are strong enough, simply cutting the central bank’s interest rate to zero may not be sufficient to stimulate borrowing and lending.”

Thus, central banks can essentially penalize member banks for hoarding funds by charging them for doing so.  A negative interest rate that charge. The goal being to strongly encourage banks to lend money and get it out working in the economy.

The negative interest is having a wonderfully positive effect on Germany’s balance sheet, sharply reducing their outgoing interest expense (they have older bonds that still pay normal interest, but fewer and fewer of those). 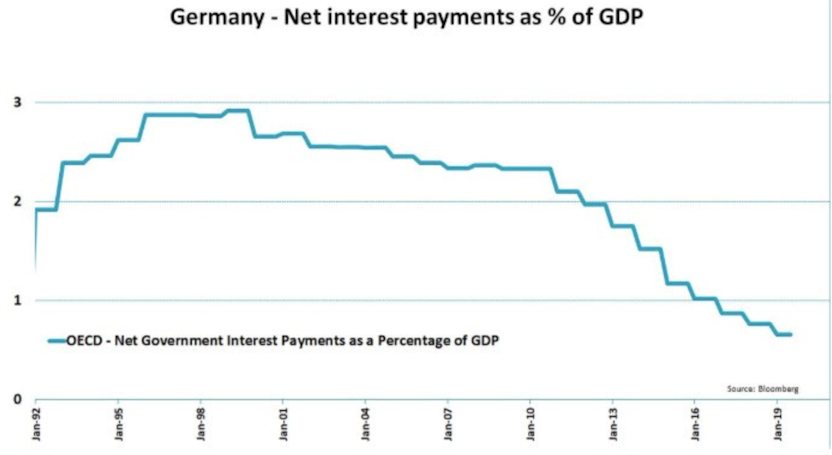 The takeaway from this is that these are not normal times.  Central bank activism has been a heavy feature of the past decade’s economic cycle.  Central banks will not always be successful.  Imbalances are being created, as they always are during times of cheap money.  Those imbalances are not widely seen until they blow up.  Where will this cycle’s imbalances be exposed and the blow up occur?  And what will central banks do in response?  Will U.S. Treasury yields go negative too?

Investors continued to wade through a heavy sea of earnings reports this week, finding the results generally pleasing. Monday saw the market push higher by +0.3% led by large tech companies, in particular semiconductor firms. Of interest, the number of declining stocks outpaced the number of gaining stocks on the day, an indication that the positive result was driven by a relatively small number of companies. The S&P 500 reclaimed the 3000 level and rose +0.7% Tuesday as earnings from a host of companies drove share prices upward. Coca-Cola (KO) was one. The global beverage maker popped +6% in an unusually strong response to its surprisingly strong earnings. Another solid day of earnings from companies across the semiconductor, credit card, and package delivery space all supported a +0.5% rise to record levels Wednesday. The Dow industrials Average did not participate in the good cheer, however, as weak results from Caterpillar (CAT) and Boeing’s ongoing 737 MAX troubles weighed on the Dow. A rebound in durable goods orders and seemingly good earnings from 3M (MMM) did not overcome a mild selloff Thursday. Perhaps the downcast session resulted from European Central Bank chief Draghi who highlighted a series of increasingly weak global economic trends in his announcement that the Bank stands ready to aggressively counter economic weakness. The Nasdaq gave back -1% on the day. However, stocks bounced right back Friday to recoup Thursday’s losses and then some. Surprisingly good results from Nasdaq heavyweight Alphabet (GOOGL) along with a +2.1% reading on second quarter GDP, which included a very solid consumer spending component, provided the support. The S&P 500 added +0.7% to return to new high ground.