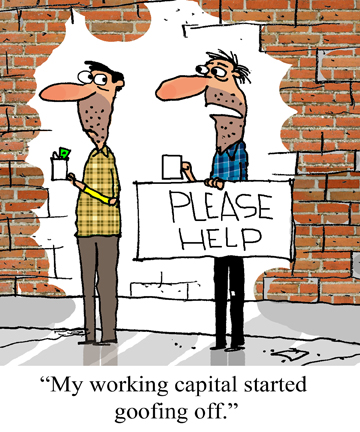 There is a natural tendency for investors to believe that the stock market will follow economic trends.  What some people fail to realize, at least initially, is that investors are looking out into the future and the expected movement in the economy.  Only when an economic datapoint shows up that is at odds with that expected outlook do stocks react.  The Citigroup Economic Surprise Index (CESI) seeks to measure how those datapoints are matching up to what has been expected.  Lately, there have been a number of “soft” economic measures (thus the plunging black line below) that the stock market (the blue line in Chart 1 below) has been ignoring.  We have highlighted in yellow a prior instance of falling CESI without a correlated market response.  Below Chart 1 is an excerpt with a more detailed explanation from LPL Financial.  We point out that none of this economic data plays a part in our models, which are driven by the stock market’s price and volume information (e.g. supply and demand for stocks). 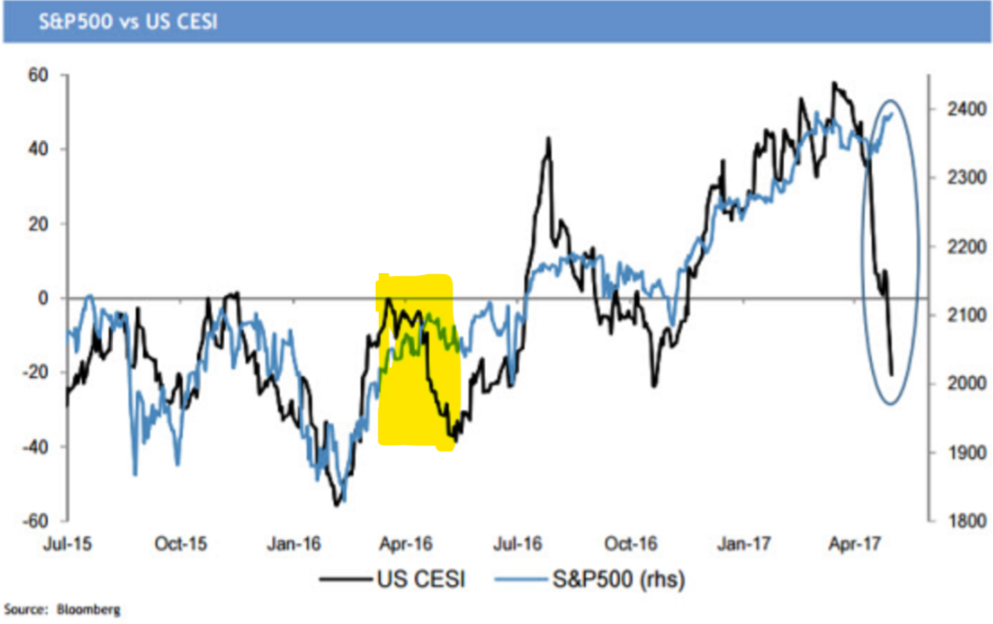 Economic data in the United States have been missing expectations more often than exceeding them in recent weeks, suggesting expectations have been pulled down as stocks reached new highs. The Citigroup Economic Surprise Index, or CESI, tracks how the economic data are faring compared with expectations. The index rises when economic data exceed economists’ consensus estimates and falls when data are below estimates. The index’s most recent reading of -48 marks its worst level in 2.5 years, well below the 10-year average (+2.8), and near levels where a reversal would typically come. The index has been dragged down by several factors, including the energy downturn, the West Coast port shutdowns, sluggish growth overseas, and the strong U.S. dollar. For example, among the reasons cited for the shortfall in the Institute for Supply Management Manufacturing Index for January (53.5 versus 54.5 expected) included the impact of lower oil prices on manufacturers, the export drag from a strong U.S. dollar, and sluggish growth overseas. Economic forecasts do not appear to reflect excessive optimism, even as stocks power to new highs.

So what does the CESI mean for the stock market? When economic data are missing expectations, i.e., when the CESI is negative falling, one would expect stocks to fall, or at least gain less; and that is indeed the case. But factors such as the data’s time lag, the forward-looking nature of the market, and shifting expectations combine to make the CESI a less effective leading indicator of stock market performance:

Investors came into the week relieved that the election in France had resulted in a win for Mr. Macron as he is viewed as a more Europe-friendly candidate, something the market likes. Monday brought a little bit of a “sell the news” attitude as European stocks gave back some of the prior week’s gain. Stocks in the U.S. traded flat on the day, and again Tuesday, and yet once more on Wednesday. The lack of movement pushed the VIX market volatility index to its lowest level since 2007 with few concerns to trouble the market now that earnings have come in strong and European elections avoided the worst case scenario. Wednesday saw crude oil bounce back though it remains below the $50 mark viewed as important by industry observers. Semiconductor firm Nvidia (NVDA) crushed earnings estimates yet again while Disney (DIS) and Priceline (PCLN) saw their shares punished for not doing better. Thursday saw a break of the market stalemate with a notable decline throughout the first hour or two of trading before spending the afternoon recovering to a slight -0.2% dip. Weak reports from “brick and mortar” retailers Macys (M) and Kohls (KSS) combined with a shockingly bad outing from new stock, SNAP, the purveyor of the Snapchat app popular among millenials. SNAP missed their first earnings report as a public company badly, sending shares down -20%. The company recovered a quarter of the plunge Friday while the broad market returned to its flat trading ways. Retailers continued to be hammered with Friday bringing unhappy reports from Nordstrom (JWN) and J.C. Penney (JCP) which both saw their shares slump by -10% or more. Inflation readings came in light leading one of the Federal Reserve speakers to question whether the interest-rate setting body needs two additional rate hikes this year. That sentiment generated a rally in bonds to close the week. The S&P 500 dipped -0.27% for the week while the Nasdaq 100 (QQQ) continued to ride a rally in Apple (AAPL) shares to a +0.77% lift. Small-cap shares remain laggards with a -1.03% loss on the day.