The dark days of December are so last year, aren’t they? A crisis of liquidity engulfed the riskier parts of the bond market leading prices to plunge. That all is forgotten now. This week, these same bonds that could find NO buyers a month ago are hitting new highs (as shown below in the chart of HYG). 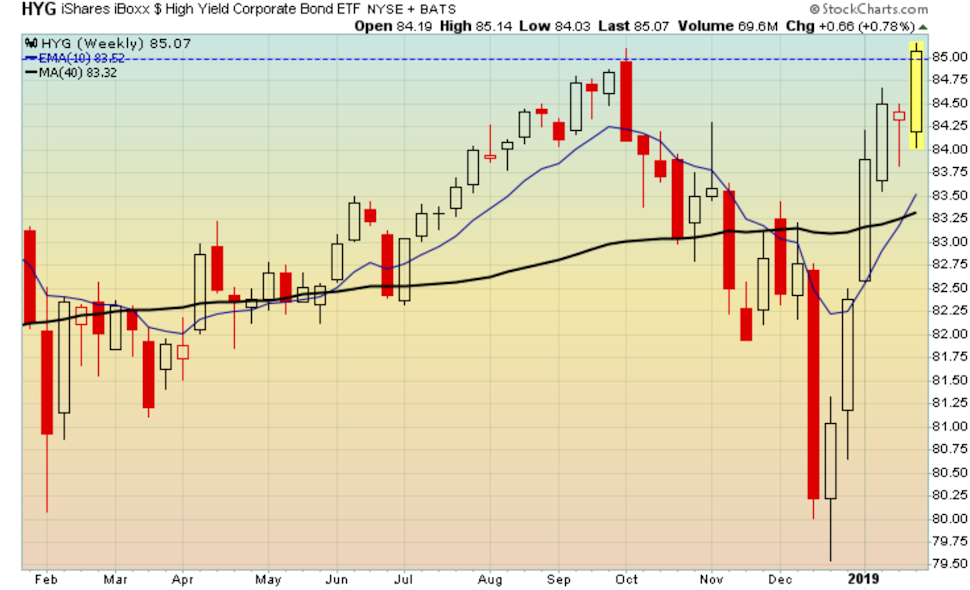 What has changed? For one, the Federal Reserve has backed off calls for higher interest rates in the near-term. Perhaps acknowledging the market’s severe December slide, the Fed has taken great pains over the past few weeks to make sure investors understand the Fed is willing to be “patient” in waiting for catalysts to push interest rates further upward. That was viewed as a marked change in tone from October, when the Fed suggested rates had further to rise. The widely watched 10-year U.S. Treasury rate (shown below) finally rose above 3% last September, only to fairly quickly fall right back down to levels last seen a year ago (when global economic growth estimates were a good deal higher).

Finally, we would be remiss in not also noting how dramatically the tide has turned for bonds outside the U.S. Emerging market bonds, and international bonds generally, have begun a new uptrend, it appears.

This move is somewhat mirrored by a general rebound in emerging market stocks.

In short, investor assumptions about the bond market has changed dramatically over the past month. The pessimism has been discarded and buyers returning. The downside to this thirst for bonds and coincident reduction in yields is that falling interest rates do not say positive things about economic growth. Falling U.S. interest rates, and the failure to hold above 3% on the 10-year Treasury bond, suggest weakening economic growth. Perhaps the slowdown hangs tough at a level of not-too-cold, not-too-hot? Our guess is that investors will find themselves reevaluating growth a few more times as the year goes on. With the China-U.S. trade negotiations pivotal, then Brexit resolution (or not), investors will have plenty to consider in the coming weeks.

The bulls continue to show strength, this week holding off another attempt by the bears to upset the January rally. Bears flexed some muscle Monday on weak results from Caterpillar (CAT) and semiconductor make Nvidia (NVDA), both of whom noted weakness in China as a source of concern. However, buyers bought the morning dip to hold the negative trading session to a modest -0.8% slip. Stocks were mixed Tuesday ahead of Apple’s earnings report, due out after the close. The S&P 500 was off only -0.2% despite continued earnings caution from companies with substantial exposure to a weakening Chinese economy; this time from Dow DuPont (DWDP). Apple’s (AAPL) report came in not as bad as feared, leading to a +6% surge in the stock during Wednesday’s session. Dow Industrials component Boeing (BA) also posted strong results to add to the market enthusiasm. Finally, the Federal Reserve weighed in, saying they will be ‘patient’ before pushing interest rates higher. Investors cheered the news, sending stocks higher by +1.6%. Another +0.9% gain came in Thursday trade as Facebook (FB) crushed earnings estimates to provide a further boost to a strong January market rebound. February kicked off with a flat session Friday as Amazon’s (AMZN) earnings failed to excite, while the monthly jobs report brought surprisingly strong gains. The higher jobs numbers pushed interest rates higher, which served to take a little bit of air out of the market.