It was no surprise that stocks rallied this week once the midterm elections had passed. Just as in 2016, and before most elections, investors become cautious ahead of elections. They usually breathe a sigh of relief afterwards. Stocks have gone higher after EVERY midterm election over the past almost 70 years, on an annual basis. With this election producing a split in Congress, is that bullish or bearish for stocks? The following research provides some data on that question:

“Our base case view of a split Congress could be supportive of equities, as markets historically do well under gridlock (nothing done, nothing undone). A Republican hold could be more near-term positive as it could suggest more pro-growth measures (e.g. further individual tax cuts or making select tax cuts permanent), but could be longer term bearish due to the stronger dollar, tighter monetary policy and widening of the deficit.

Markets generally do well under gridlock. A modest infrastructure bill might see bipartisan support, which could lift Industrials and Materials. A Republican sweep could be equally positive for the overall market as gridlock, as a coordinated Congress could move to enact pro-growth measures. These could include another round of individual tax cuts, or making select tax cuts permanent. But repeal and replace of ACA would likely be up for grabs, an overhang for Health Care. The impact here would likely be risk-on and certain sectors would be more likely to benefit. But the stronger USD expected under this scenario could hurt S&P 500 earnings, and if rampant growth results in tighter monetary policy, equities could end their bull run the way they have tended to historically at the hands of the Fed. Meanwhile, a Democratic sweep could increase the risk of congressional investigations. And while this scenario is currently not on the table, in the event of impeachment proceedings, it could be classified as an exogenous macro “shock.” Since 2010, shocks have driven a 6% peak to trough decline, but the market has generally recovered much of the initial selloff. A longer term risk of a Democratic sweep could be a potential reversal of tax reform, which has contributed double-digit earnings growth to S&P 500 companies.

The US equity market generally does well following mid-term elections both in the near and long-term. On average, S&P 500 annual returns following a midterm election have been stronger than overall annual average market returns since 1952 (Chart 3). The best consecutive three months of the mid-term year are October, November, and December. The S&P 500 has been up 86% of the time with an average return of 6.4% during 4Q of the mid-term year.”

and here’s the chart: 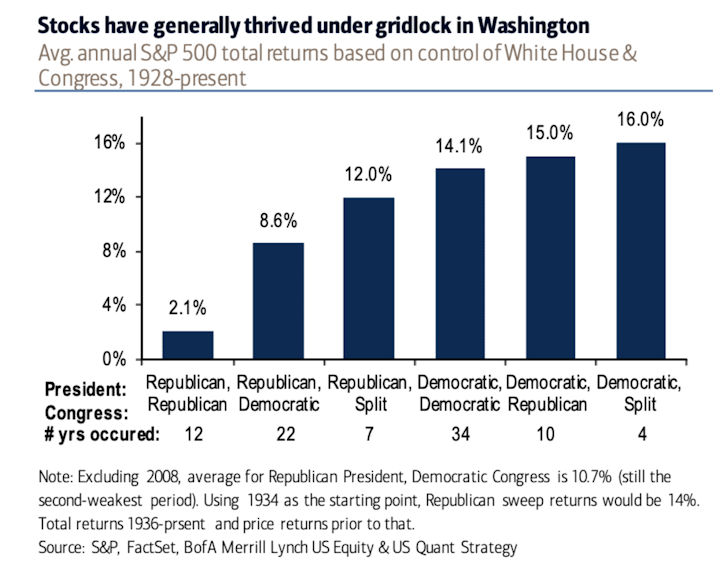 Our models do not incorporate election results, seasonality, or anything other than the staples of technical analysis – price and volume action of the market. Nevertheless, we are students of the markets and find any repeatable patterns of interest.

The current market condition remains uncertain but improving as some broad market indexes remain below their longer-term 200-day trendlines – a typical reference point for bullish or bearish price action. Large-cap U.S. indexes have jumped back above this long-term trendline. Small/mid-cap and international stock indexes remain below it. Bulls would like to see these lagging indexes retake these trendlines. Bears will expect this bounce to fail and markets to head back down to their prior lows, to retest the bottom of the recent drop. We will see who wins this battle and be ready to follow the prevailing trend.

Investors looked this week to continue the market’s rebound and leave a very ugly October showing behind. Monday brought a +0.6% rise for the broad market led by defensive sectors while tech shares posted slim losses. Tech shares joined the move Tuesday with indexes adding another +0.6%, this time on warm words on trade from China. Stocks bolted +2% higher Wednesday in a post-election relief rally as election results matched market expectations. However, shares slipped back -0.3% Thursday and -0.9% Friday as the rally fizzled. Output Thursday from the Federal Reserve’s meeting brought no new information. Friday’s tumble was largely driven by weakness in semiconductor shares, a group that has experienced consistent selling in part on fears that iPhone unit sales are peaking as well as the global economic slowdown. Interest rates slipped back Friday as investors returned to buying more defensive areas of the market. Crude oil continued a very rough patch, now down -20% in five weeks as news flow continues to point to excess supply.

For the week, stocks held to solid gains, at least among large cap issues, with the S&P 500 (SPY) adding +2.18% in a second consecutive positive week. The Nasdaq 100 (QQQ) pushed higher by +1.26%, while small-cap stocks (IWM) resumed their lagging behavior, posting a flat week.