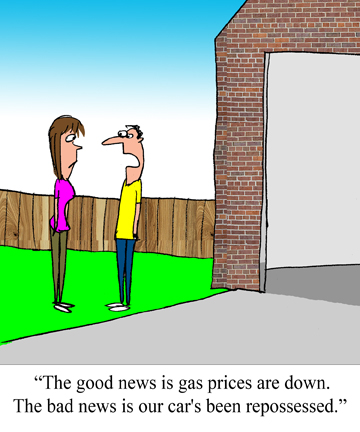 There are increasing calls for the Federal Reserve to step aside and let the market do its thing. Oh sure, there have long been the Fed doubters who despised the central bank intervention in bond markets, which in turn heavily influenced stocks and other assets. But those voices were largely drowned out as stocks roared higher and the Fed appeared to have successfully put a sturdy floor under the markets with ultra-low interest rates as the fuel. Markets are now telling the Fed that they’ve had enough, however, of the easy money policies of global central banks. With interest rates now negative across wide swaths of the global government bond market as German bonds went negative just this week.

How do we know that the Fed has “lost control” as bond manager Jeff Gundlach proclaimed earlier this week? We’d say it’s because the stock market has started to react negatively when the Fed talks about keeping interest rates low.

Bank stocks still follow interest rates higher and lower. However, the broader stock market, once a huge fan of falling interest rates, now is mixed at best when rates are falling and is highly likely to drop along with rates. This suggests that falling rates have lost their luster as a catalyst and are now viewed as being low because the economy globally cannot muster any strength.

Chart 1: Bank stocks track interest rates up and down

Frustration came from investment blogger Josh Brown this week: This is a low-flying panic attack

While the aforementioned Mr. Gundlach continues to take central bankers to task for the increasingly toothlessness of their easy money policies: GUNDLACH: It’s going to be a rocky summer

The proliferation of negative interest rates

Negative interest rates are an odd beast. Borrowers usually have to pay you to receive your investment in their bonds (in the form of interest payments). However these days you have to pay the borrower in many countries. This reflects a sort of market disconnect where central banks are massive players in the market and have different objectives than to receive interest on their investment. Negative rates are widespread and becoming more so every week.

Investors struggled all week with the implications of a British exit from the European Union (EU) when polls, which had been showing voters leaning toward remaining in the EU, suddenly shifted to favoring the island nation exiting the European economic cooperative. Adding to the negative tone were reports of weakness out of China and the usual uncertainty surrounding central bank meetings and whether this era of extremely easy monetary policy would be altered. Monday’s trade began poorly with the International Monetary Fund (IMF) offering a gloomy outlook for the high levels of China’s corporate debt. Stocks slid -0.8% on the day though more noteworthy was a huge spike in the volatility index (VIX) of more than +20% perhaps better expressing the fears brewing within the investor mindset (the VIX spikes when investors buy ‘insurance’ in the form of option protection against market downturns).
A -0.2% dip was added in Tuesday’s trade as caution continued to rule. Wednesday brought the outcome of the latest Fed meeting with the central bank pushing out expectations for a series of rate hikes in 2017 and 2018. This ultimately left investors uneasy with a positive market day dropping sharply into the close to finish down -0.2%. Stocks rebounded Thursday after opening lower in a major reversal when the S&P 500 hit the 2050 level. The index finished the day +0.3% after being down over -1%. Cautious notes in the tech sector pushed the Nasdaq 100 downward Friday as volume surged on the day of monthly options expiration. The tech-heavy index lost -0.9% while the other indexes finished with losses only 1/3 as steep.